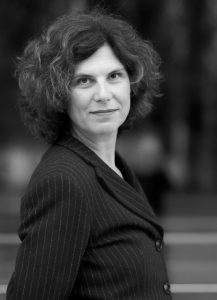 Katrin Schlösser lives in Berlin, Cologne and Bonisdorf. In 1990 she founded öFilm Production together with Frank Löprich. She has been a member of the Allocation Committee of the FFA (German Federal Film Board) and Jury Member for the films in competition at the Berlin Film Festival, among other positions. In 2007 she was appointed Professor of Dramaturgy and Creative Film and Television Productions at the Academy of Creative Arts in Cologne.

Working alongside writers and directors she develops feature film and documentary material which she then accompanies through the production process; recent examples include DIE KOMMENDEN TAGE by Lars Kraume and BABAI by Visar Morina. Among her current projects is the feature film IN MY ROOM by Ulrich Köhler: she is creative producer on this production for Pandora Film Produktion. She is responsible for concept, directing and camerawork on her debut film SZENEN MEINER EHE (SCENES OF MY MARRIAGE), due for release in 2019. You are warmly invited to attend the premiere.